3D print in the Auto Industry

3D printing has become a buzzword in the news and everywhere online, but what is it? Basically, the most common form of 3D printing is just like your home printer, but it prints 3-dimensional objects, most of the time using plastic. The printer lays down layers of material that build up to create the desired structure. Of course, there is a lot more that goes into it, so here is a video by Digital Trends going deeper if you’re interested. - How Does 3D Printing Work? | The Deets

3D printing has greatly improved the speed at which automakers can build and test new designs. They can manufacture parts quickly and much cheaper on a small scale than before. This allows developers to experiment more and redesign quickly. Automakers have even designed full-concept cars with 3D printing. Cars which may have never seen the physical world due to cost. 3D printing has started to make an appearance on some of the low-volume production runs of vehicles as well. It can be used to make parts that are lighter or made from exotic materials like carbon fiber. 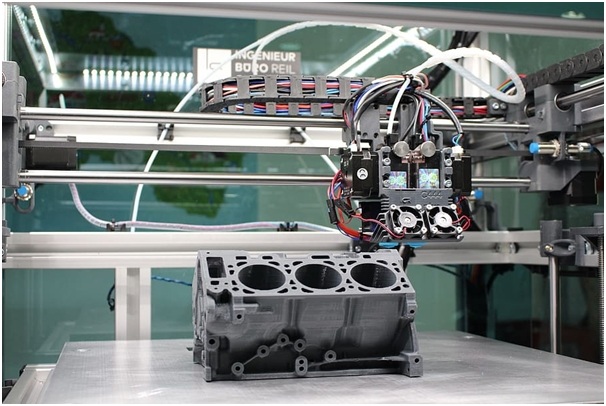 Customization has been the real benefit consumers have seen from 3D printing. There have been a couple of different ways 3D printing has affected the industry. At-home and aftermarket customization or manufacturer-built customizations. There is a whole space of hobbyists who design 3D-printed objects for their vehicles. Objects like custom key fobs, replacement knobs, dash ornaments, and custom phone holders just to name a few. Most of the time these customizations are only decorative, most home 3D printing isn’t suitable for anything structural. So, printing something like a new gas pedal would be inadvisable, because the material is often too brittle or will fatigue quickly.

We are still in the early days of 3D printing in the automotive industry. As technology continues to grow and the costs drop, we’ll likely see more adoption. In the future, parts may be 3D printed locally instead of shipped across the globe. In small ways this has already begun in segments such as the classic car industry. When parts aren’t available or don’t exist, they can be printed.

3D printing has opened the door for individuals and industry to create more efficiently. With projects that take days instead of months. It’s a fun and exciting time to see how it can be utilized. From people making custom trinkets to full-blown production of parts, they can improve our vehicles. 3D printing technology may turn into one of the most important parts of the automotive industry.